MARCH 2022 – Maarten Klein, CEO of GreenA BV, will speak at the ISAA (International Symposium Agro Adjuvants) 2022 in Bordeaux, France. The topic of the talk will be the spray coverage of novelty anti-drift nozzles and the need for adjuvants. The abstract of the talk can be found below.

Abstract: Spray coverage of novelty anti-drift nozzles and the need for adjuvants.

The drop size distribution in agricultural sprays is continuously increasing because of the use of anti-drift nozzles to comply with environmental regulations. We show that with an increasingly coarse droplet spectrum, leaf coverage becomes very bad, especially on difficult to wet crops. We find that deposition can be significantly improved by adding a polymer-based adjuvant. At the same time, the polymers give a robust drift reduction technology that allows to increase drift reduction even further.

To optimize deposition and understand the effects of adjuvants, one must quantify the coverage on the leaves. One of the criteria used to judge the efficacy of, for instance, a fungicide application is the coverage by deposited spray droplets. For contact fungicides this is usually expressed as the number of drops per square cm. Typical reference numbers are 50-70 droplets/cm2 and are obtained with regular flat fan nozzles. [1,2] However in the field these nozzles are less and less used and are increasingly being replaced by novelty drift reducing nozzles, for which droplets become much coarser. These droplets are less prone to spray drift and therefore reduce the emission of plant protection products to the environment. As an example, a typical flat fan reference nozzle is the Teejet XR 110-03, which produces an Volume Median Diameter (VMD ) of 186 micrometer at 3 bar. [3] Anti-drift regulations impose nozzles with coarser droplets, which poses the question of how good the retention is with these nozzles, and how it can be improved with adjuvants. One example is, a TDXL 110-06 nozzle which produces an Volume Median Diameter (VMD ) of 588 micrometers, 3 times as large.

Deposition was measured in a spraying rig where the nozzle moves over the chosen crop with a speed comparable to that used in tractor spraying. A fluorescent dye was added to the spray, and the coverage was visualized using an UV lamp, after which the images were digitized and treated to quantify the coverage.

We investigated several anti-drift nozzles, and found that such nozzles produce droplet sizes with a VMD that is much larger. Such droplets more easily bounce off from a leaf surface causing poor and uneven deposition on the crop, with deposition densities lower than 5 droplets/cm2. Poor leaf deposits by using large droplet spectra substantially decreases the effectiveness of contact fungicides and can be only partly compensated by higher spray volumes. [4] In this presentation we will present an overview of coverage using different nozzles based on many field tests. It shows that field practice is different from laboratory findings; the latter are widely used in literature. We investigate that the outdated results using flat fan reference nozzles do not match the actual field practice results. We demonstrate which nozzles in 2021, with poor deposition, need to be used due to governmental laws. We also investigate how adjuvants can be used to positively influence the active substance coverage on the leaf surface. The importance of adjuvants becomes clear when we show significant increases of the deposition densities. With our latest fluorescence analysis method, we are able to quantify the adjuvant effects in the field. We do so with several common drift reducing nozzles in several major crops in the figure below. With the ban on several major actives, the anti-drift laws and the current disease pressure, the role of adjuvants become much more of importance. 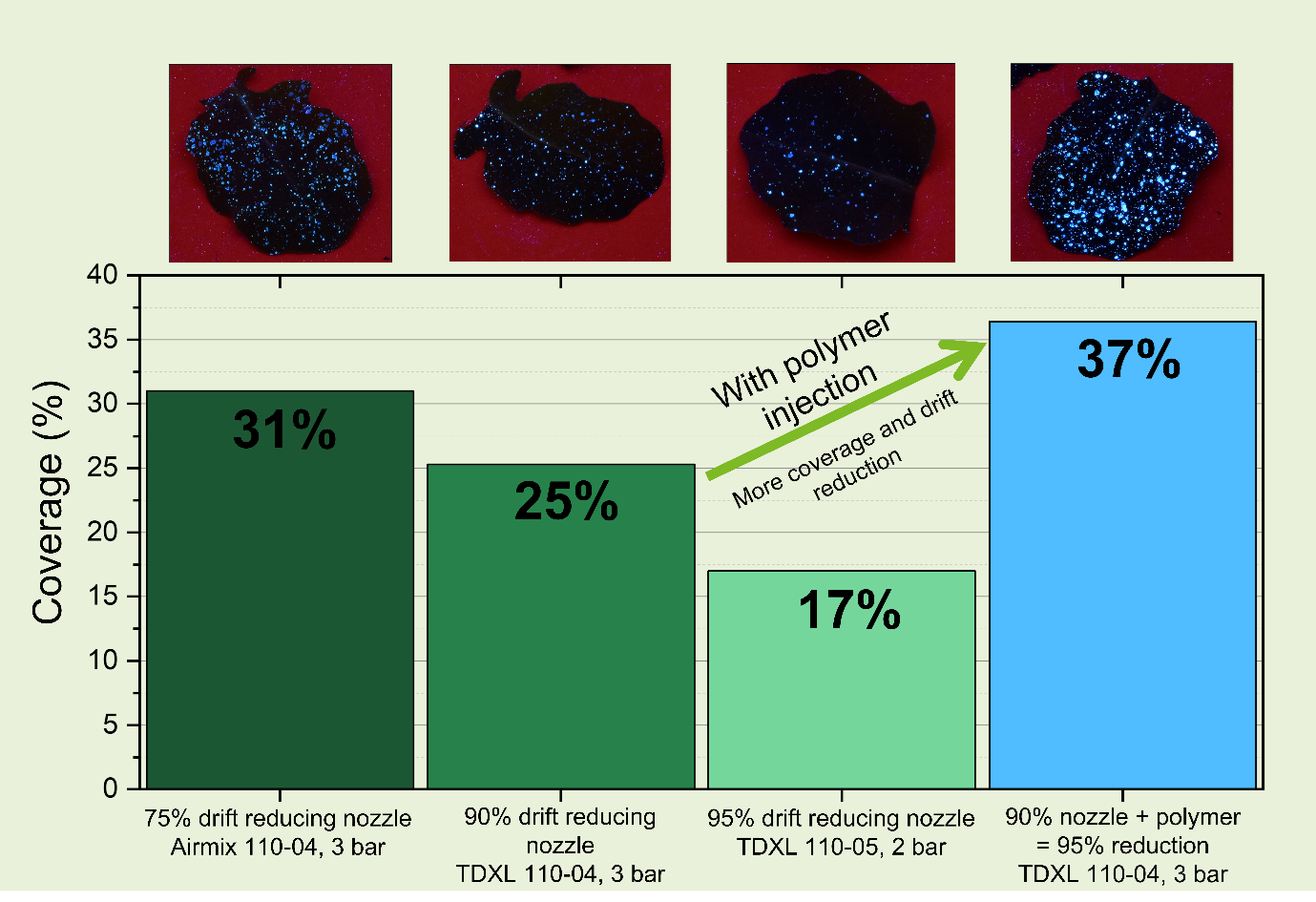 Figure showing the difference in coverage on broccoli leafs measured with a fluorescent dye, spraying with a Teejet 11003 nozzle at 3 bars. Coverage with water decreases very significantly with increasing drift reduction class. With a polymer-based adjuvant added, coverage is very good, and drift reduction is one class better than the nozzle is classified as.